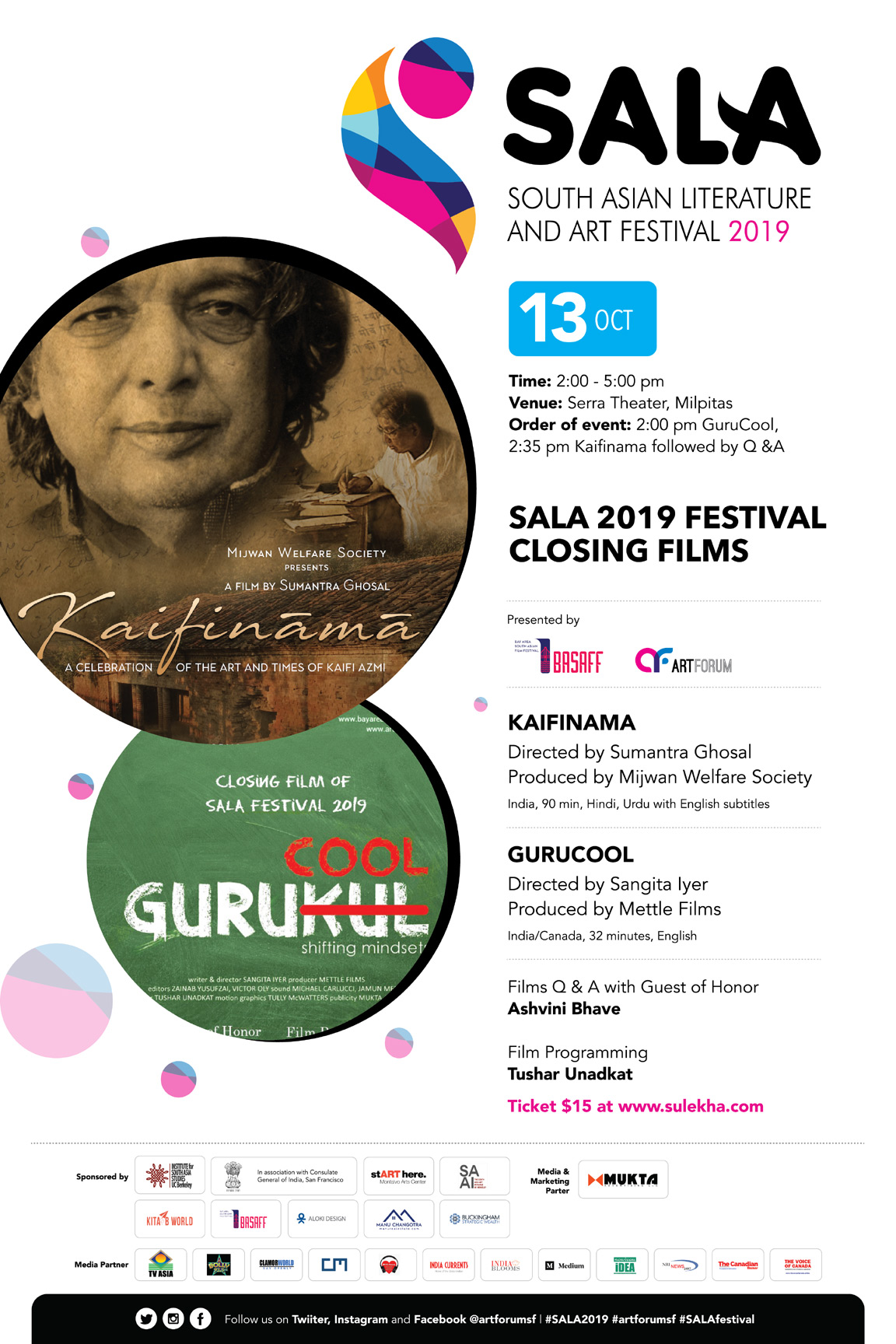 For the first time, Montalvo Arts Center and Art Forum SF in collaboration with UC Berkeley Institute for South Asia Studies brings to you one of the largest South Asian Literature & Art Festival (SALA) in the US that includes a film segment.

“2019 happens to be the birth centenary of my father Kaifi Azmi and we’ve done many things to celebrate him, and out of all that, the most important is Kaifinama because it really encapsulates his spirit through his work, through his poetry. In the current age, it is important to revisit people who were involved with progressive writers’ movement, people who believed that art should be used as an instrument to bring social change,” said Shabana Azmi in conversation with Art Forum SF.

“We are delighted to announce the grand finale at SALA 2019 is Sumantra Ghosal’s Kaifinama, produced by Mijwan Welfare Society that looks at the life and art of the Urdu progressive poet Kaifi Azmi. Kaifi Azmi was both a poet for social change as well as one of the foremost lyricists in the Hindi film industry,” said Ambika Sahay, Executive Director – Art Forum SF with excitement.

Kaifinama a 90-minute documentary from India is in Hindi/Urdu language with English subtitles, won the Best Documentary Audience Choice/Poll Award at the DC South Asian Film Festival in on September 22, 2019.

SALA 2019 is excited to announce our Guest of Honor for the Film Segment is Ashvini Bhave, an Indian model and actress known for her work in both Hindi and Marathi films and television serials. Ms. Bhave will be in attendance and available for a Q & A after the screenings.

The mandate of Art Forum SF includes encouraging emerging artists at SALA and hence, one is a short documentary titled GuruCOOL, produced by Mettle Films and directed by an Indo-Canadian Director Sangita Iyer that looks at the Indian educators in the 21st century education system. (India/Canada, 32 minutes, English).

“One of the festival purposes is to elevate the perspective of the second and third generation of South Asians about our Literature & Arts Industry. We often hear about Bollywood events, religious celebrations, and other cultural activities which is important, however, we also need to highlight our prestigious literary talent (cinematic medium) who significantly contribute to the international art space,” said Tushar Unadkat, Film programmer at SALA 2019, who is also the Media and Public Relations Director Art Forum SF

Select Highlights of the festival include:

The Victorious trio of Netflix Original series SACRED GAMES – Author Vikram Chandra, Scriptwriter Varun Grover, and Director Vikramaditya Motwane, will be on one panel at the SALA Festival. Netflix India’s Sacred Games is nominated for International Emmy Award 2019 in the Drama Category. The crime thriller is directed by Anurag Kashyap and Vikramaditya Motwane. Witness an elaborate and enriching encounter with legendary actor, painter, and poet, Deepti Naval, in conversation with Prof Harsha Ram from UC Berkeley.

There is a special event on October 18th from 7:30 pm with critically acclaimed director Anurag Kashyap. Tickets are limited and for $25 only for this special event.

SALA Festival will be held at the Montalvo Arts Canter, Saratoga from October 6 – 13, 2019 from Noon till 5 pm. For all current updates, artist bios, tickets and other literary and art exhibits, please visit: www.artforumsf.org

For more information about media & marketing opportunities and to interview the celebrities, please contact MUKTA Advertising at info@m-a.ca | 416.716.8582.