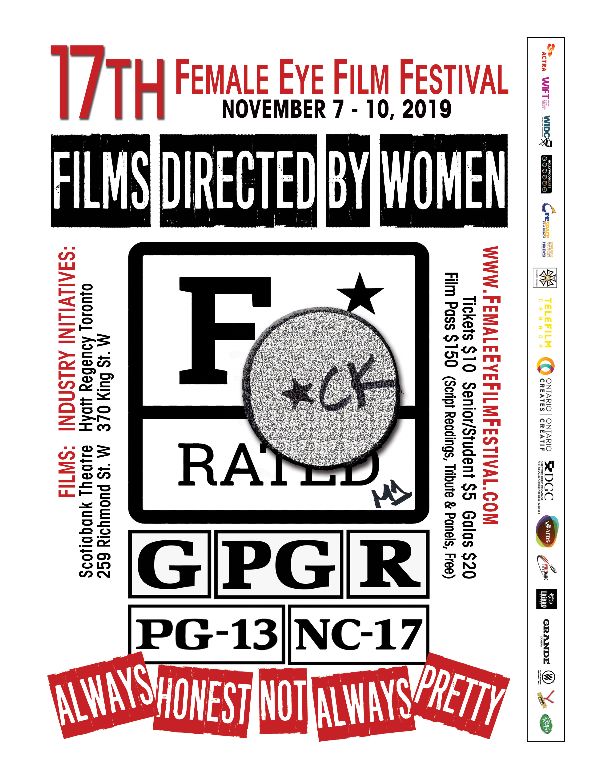 FeFF is thrilled to showcase so many talented women, most of whom are writers, directors and producers by featuring films from around the globe – Iran, Greece, Armenia, India, Russia, Ukraine, Israel, Italy, Ireland and the UK – and films from all across North America. Some directors return to FeFF with their new features, documentaries and shorts while Feff also discovers the work of independent female filmmakers and screenwriters during this important shift for gender parity in our industry.

The Female Eye Film Festival was voted one of the World’s Top Fifty Film Festivals Worth the Entry Fee by MovieMaker Magazine for the seventh consecutive year in 2019. FeFF is a not-for-profit annual competitive international film festival for women directors that bridges the gap between the written, visual, and media arts.

This year the Best in the Biz Tribute, a signature series of the Female Eye, celebrates Canadian writer, director and producer Mina Shum as FeFF Honorary Director 2019.

Born in Hong Kong and raised in Vancouver, Mina Shum is a multiple award-winning independent Canadian filmmaker. She has written and directed numerous shorts and five feature films that have successfully touched international and domestic audiences. Her artistic background is eclectic: she has created site-specific installations, made theatre and was also a member of an alternative rock band called Playdoh Republic. She was director resident at the Canadian Film Centre in Toronto. Her award-winning films Meditation Park (2017), Ninth Floor (2015, documentary), Long Life, Happiness & Prosperity (2002), Drive, She Said (1997) and Double Happiness (1994) have premiered at Sundance, Toronto and Berlin. Double Happiness won the Wolfgang Staudte Prize for Best First Feature at the Berlin Film Festival and the Audience Award at Torino in 1994. The New York Times calls her work “wry and winning.” Her recent directing work for television includes Frankie Drake Mysteries, Murdoch Mysteries and October Faction, an upcoming series for Netflix. The discussion will be moderated by Carol Whiteman, President & CEO, CWWA Producer, WIDC.

The Opening Night film is Murmur, written and directed by Heather Young, winner of the 2019 FIPRESCI Discovery Prize at the Toronto International Film Festival.

The Closing Night film is Mad? in which elderly iconoclastic artist Mir-iam Kohen is admitted to a geriatric mental-health facility against her will. She immediately understands that this is no ordinary hospital. Over the course of 28 bizarre days, Miriam experiences myriad strange occurrences as she battles against doctors, patients and the system to retain her civil rights. Is she crazy, or are they?

Starting in 2020, the FeFF will move to March to intersect with International Women’s Day (IDW), as part of its move their new home at TIFF Bell Lightbox.

Tickets are $10 at the door or advance purchases on online, Opening and Closing galas are $20, an all-access film pass is $150. For more information, visit www.FemaleEyeFilmFestival.com