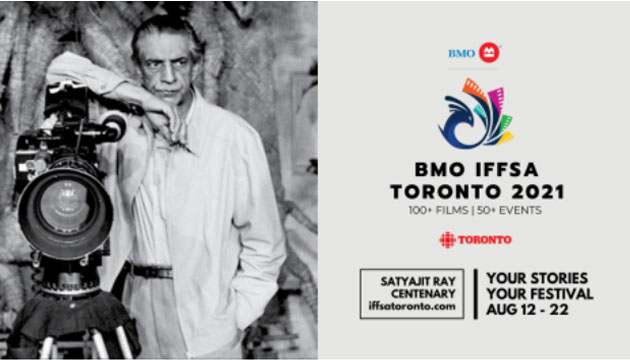 Let’s celebrate the cinema, that gives us an opportunity to expand our lives. BMO International Film Festival of South Asia Toronto, the largest South Asian film festival in North America, is back!

BMO IFFSA Toronto 2021 is scheduled online from August 12th to 22nd. The IFFSA Virtual Home and Virtual Theatre are now live! You can start exploring the detailed schedule and booking your FREE PASSES for 100+ exciting films and 50+ engaging events at www.iffsatoronto.com to fill your calendar with 11 days of continuous excitement! 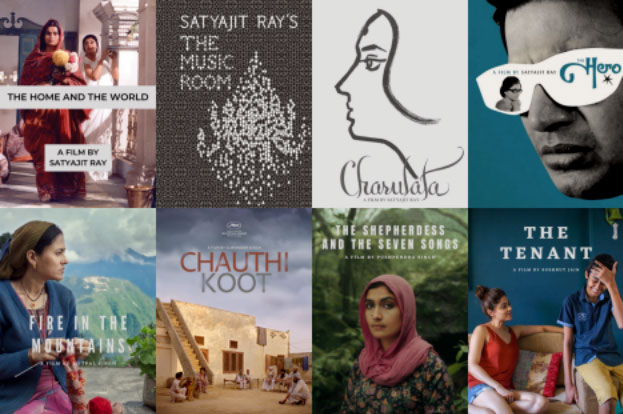 With its main theme of The Home and The World, this year’s festival is celebrating the centenary of Satyajit Ray, one of India’s most celebrated and influential filmmakers, a trailblazing storyteller, and a true global icon of cinema.

In the words of IFFSA Ambassador Anup Singh, “Ray’s films aim to transform, and there’s a resplendent affirmation of our earthly life in his work. By celebrating Ray, we celebrate what is best in us.”

Screenings of some of Ray’s finest masterpieces will anchor this celebration. The festival will open with Ghare Bhaire (The Home and the World), and will also screen Charulata, Nayak (The Hero), and Jalsaghar (The Music Room).

Alongside these great works, this year’s lineup of films will include many contemporary masterpieces as well. The festival’s closing films are the globally celebrated Chronicle of Space (Sthalpuran) and Pebbles (Koozhangal). Over the course of 11 days, the festival will shine a spotlight on many more critically acclaimed films such as Fire In The Mountains, The Shepherdess And The Seven Songs, Chauthi Koot, Fire, and Funny Boy. These films have earned laurels from the upper echelon of global film festivals including Cannes, Sundance, Rotter- dam, and Berlin, and are now available for IFFSA patrons to view from the comfort of their own homes.

Tastefully curated IFFSA films and events will come together through 11 kaleidoscopic festival themes including The Feminine Mystique which highlights stories on femininity, Love is Love is Love which focuses on sharing the stories of members of the 2SLGBTQIA+ community, Frame of Mind which features films touching on mental health, and Pain of Prejudice which is dedicated to highlighting experiences with racism and discrimination through cinematic expression. The other themes are Love, Lament & Rebellion, Contemporary Voices, Many Cinemas of South Asia, Many Musics of South Asian Cinema, Canadian Panorama, and The Bright Lights of Cinema.

The festival’s Canadian Panorama theme showcases Canadian works from across the country on South Asian Canadian themes, anchored by S.B. Edwards’ feature Fall Back Down. This day will also feature the engaging panel: The Pitch and Chase – Navigating the Road to Working with OTT Platforms. This discussion between Tina Apostolopoulos of Bell Media, and CBC’s own Jennifer Shin and Zach Feldberg, hosted by CBC Alum Canadian Screen Award-winning Actor, Writer, and Producer Supinder Wraich is a must-watch for any Canadian filmmaker looking to break into the world of streaming services.

With its mandate to build the South Asian Canadian narrative through cinematic arts, IFFSA has taken a leadership role and launched the IFFSA Talent Fund. This initiative will support emerging South Asian Canadian talent in showcasing their creative visions and furthering their careers toward feature filmmaking. In its first year, the fund will support five short narrative projects with help of up to $75000 total.

IFFSA Toronto is thankful to the proud supporters including BMO Bank of Montreal, Savour Ontario, CBC, Toronto Star, Turkish Airlines, City of Mississauga, Ontario Creates, and Telefilm, who help to make the festival’s vision a reality.

To view the full festival schedule, get FREE PASSES, and partake in the festival visit www.iffsatoronto.com.