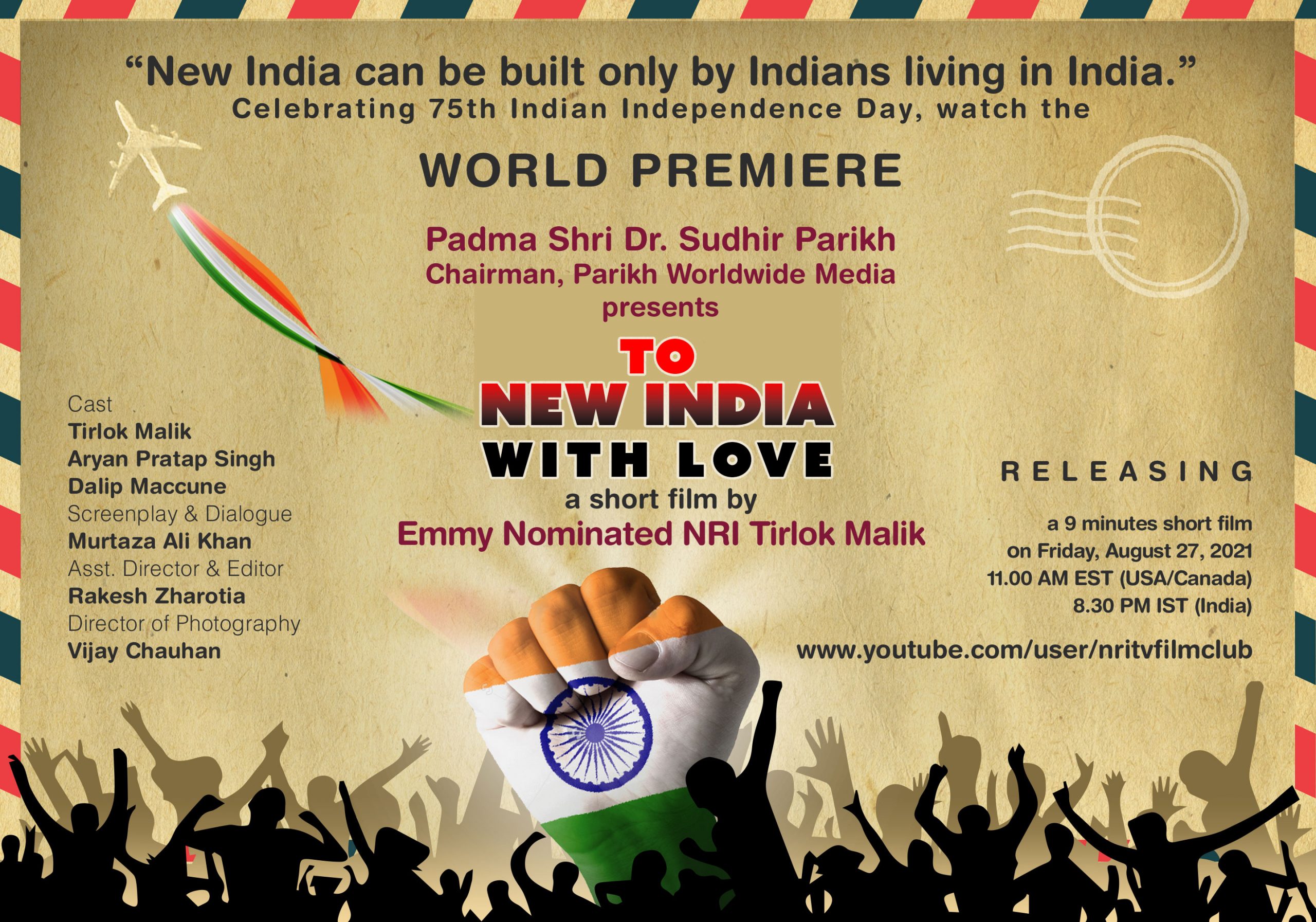 TO NEW INDIA WITH LOVE

New York: Worldwide NRI’s are excited about India’s 75th Independence Day celebrations and besides the parades in New York, Toronto and Sydney, and other major cities around the world, there are artists making strides to express their patriotic emotions.

Tirlok Malik, an Ayurveda restaurateur, Happy Life Yoga speaker, and Emmy nominated Indian American filmmaker, is best known for making films about Indian immigrants in the US such as ‘Lonely in America,’ ‘Khushiyaan,’ and ‘On Golden Years,’ among others. His latest outing, a short film titled ‘To New India with Love,’ endeavors to touch upon the all-important subject of youth aspirations. Padma Shri Dr. Sudhir Parikh, Chairman of Parikh Worldwide Media, presents the short film release celebrating India’s 75th Independence Day.

“The future of India rests on the shoulders of the youth. Therefore, every step taken to empower the youth is a step forward towards fulfilling the dream of New India. The film ‘To New India with Love’ is a sincere attempt to inspire the youth and instill hope and confidence in them towards the building of New India,” comments Padma Shri Dr. Sudhir Parikh, whose lifelong work demonstrates his love and commitment for India.

‘To New India with Love’ tells the story of Vijay, a young college student, who asks a visiting NRI professor, Prof. Khanna, to help him go to America, and he has his passport ready. The short film explores the emotional conflict that comes with the reality of life. When Vijay asks Prof. Khanna if he can help him go to America, the professor reminds him that “New India is in the making” and must play his part in contributing to New India. Vijay disagrees and expresses his frustrations and struggles, proclaiming, “New India is all about faking.” He has completed his graduation, but he can’t find a job and feels guilty about not financially supporting his family. When Prof. Khanna encourages him to have faith in New India, Vijay snaps back, “Why don’t NRIs come back to India, including yourself?”

According to Malik, “‘To New India with Love’ aims to enable the youth of India. The heated debate at the heart of the film shows how sometimes a conversation can change the direction of one’s life. Many young people want to leave India, but all of them can’t get visas. Moreover, migration is a choice one makes, and there is an emotional price associated with it. But ultimately, it is up to an individual”.

“This is a timely and important short film to motivate the young people of India,” says Tushar Unadkat of MUKTA Advertising (Canada).

‘To New India with Love’ stars Tirlok Malik (as Prof. Khanna), Aryan Pratap Singh (as Vijay), and Dalip Maccune. Murtaza Ali Khan wrote the screenplay and dialogues. While Rakesh Zharotia is the film’s editor and assistant director, Vijay Chauhan serves as the DOP.

‘To New India with Love’ will be released on various digital platforms. So, join us for the World Premiere on Friday, August 27, 2021, at 11.00 AM EST (USA/CANADA) and 8.30 PM IST (INDIA) on the YouTube channel of nritvfilmclub. The film’s teaser is out, and you can watch it now!